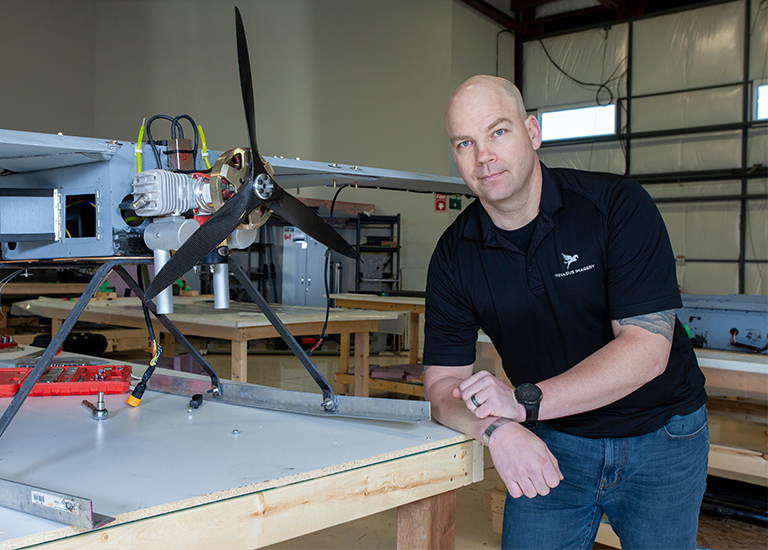 Cole Rosentreter taught people how to jump out of planes in the dark. In December 2014, a random, extremely serious parachuting accident left him on a long road to recovery. Cole was 32. The idea for his business, Pegasus Imagery, came to him in 2016 – “to build a company that focuses on disasters.”

Cole joined the Canadian Armed Forces right after 9/11, and was deployed to Afghanistan in 2005, in 2007 and again in 2009. “Many of the lessons we’re putting into practice as a business now were built through those 15 years in the military. The skills are directly transferrable.”

Cole left the military in June 2018 and, in August, joined Prince’s Trust Canada’s Operation Entrepreneur’s in-person boot camp in Regina to start and develop Pegasus Imagery. “Faculty, students, and local startups gave their time freely, it was amazing to receive so much help.” Cole describes leaving the military as a journey of building a network from scratch, which is why, he explains, “John Hryniw (Pegasus Imagery co-founder) and I are passionate about supporting Buy Veteran. We see the amazing work being done by Veteran-founded companies and we want to support that.”

“Pegasus Imagery’s focus is solving wildfires in Canada, which on average equal the total national emissions from fossil fuels. Technology is being used overseas, yet here at home, the military gets called for disasters – floods, fires, ice storms. What’s missing is technology to support front line responders in high-risk situations. Pegasus Imagery aims to address wildfires by collecting data that decision makers need to combat challenges that we are facing globally and to reveal those challenges as they start to emerge.”

For Veterans considering following the same entrepreneurial path, Cole’s advice is to “take ownership of absolutely everything that happens – outside the military, everything is on you. Take ownership of what you can control – the good and the bad and figure out a way to move forward. And never be too proud to ask a question; a big part of what has made us successful to date is humility.”