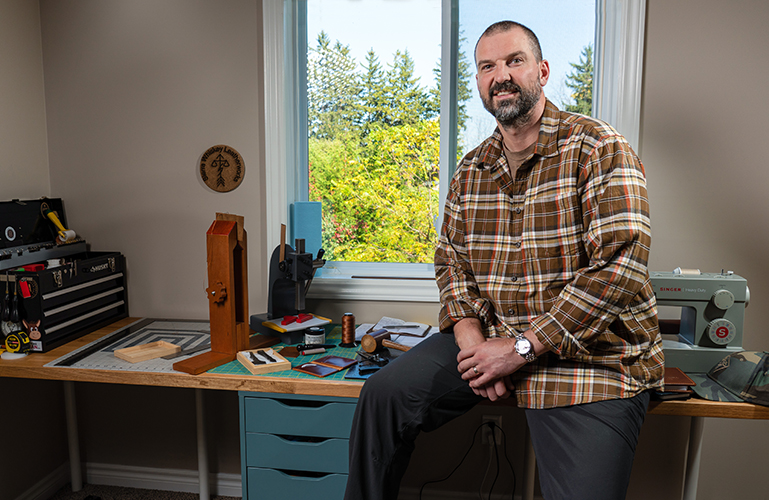 Attention to detail is a skill Jeremy Mitchell honed through years of military service. Now, it is a skill he uses to design leather goods, some embossed with finely crafted details that pay homage to his past.

Jeremy joined the Royal Highland Fusiliers of Canada as a Reservist in 2001, and then became the lead of a tactical unit with Guelph police in 2007 where he continued to serve for over a decade until deciding to take a break for his mental wellbeing. “I needed to refocus on what I wanted to do with my life,” explains Jeremy. “What came next was thanks to a friend’s recommendation.”

Prince’s Trust Canada’s Operation Entrepreneur’s boot camp was suggested to Jeremey by a friend in the military. “The pandemic had low points, but the fact that boot camp was virtual made it possible to maintain my mental health and emotional focus while taking care of two young children. It was such a positive experience and helped me discover some meaning and a purpose,” explains Jeremy.

“Around that time, my wallet was falling apart and I thought, for the same amount of money, I could make myself a new one. I made a few other things along the way and that’s when my business, Sierra Whiskey Leatherworks, was born.”

With economic sustainability in mind, Jeremy started at his kitchen table making the most out of what he could afford – from durable leather to working with local supplies – Sierra Whiskey Leatherworks now prides itself as a sustainable company.

“We are all trying to find our own direction and purpose. Buy Veteran has helped me with that by providing a definite sense of community, one with a sense of camaraderie that is humbling, empowering, and reassuring that I am never going through hardships alone. Now, I’m in the Prince’s Trust Canada Mentorship Program in hope of giving back to someone who needs it,” explains Jeremy.