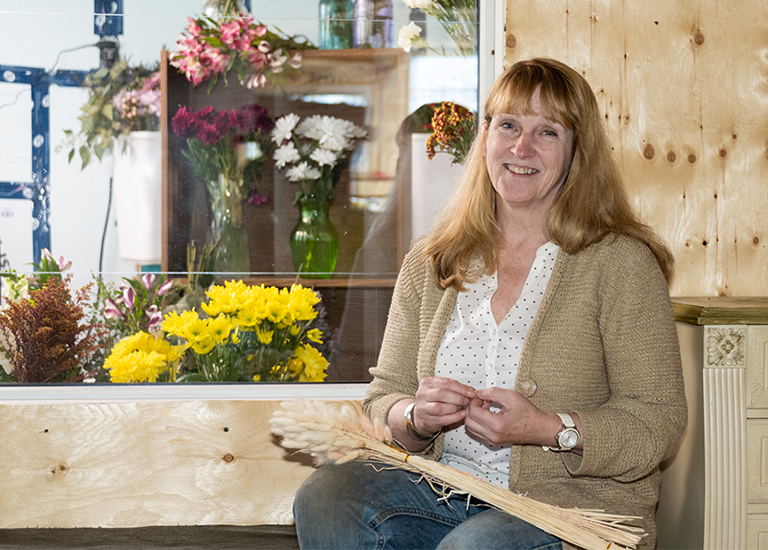 Moira McKenzie, Flowers by Moira, near North Bay, ON.

After 36 years of travelling the world with the Royal Canadian Airforce, Moira McKenzie decided to leave the military to start something new.

At 19, Moira began her military career as an Aerospace Control Operator and, in her final role, was the Crew Chief with 21 Squadron out of 22 Wing in North Bay NORAD Unit.

In 2016, it was “out of one uniform and into another” as Moira started working in hospitality; however, what came next would change the trajectory of her career. “I decided to sign up for a flower design course at the Canadian Institute of Floral Design. After two days, I was hooked,” Moira explains.

With a business license and wholesale supplier, she started doing arrangements for local businesses, drawing on her military skills. “I needed a mission. In the military you always have a mission to complete. Every arrangement is a new mission.”

At a Prince’s Trust Canada (PTC) workshop for Veteran entrepreneurs, participants could ask questions of a panel – “I was stumped. I didn’t know where to start or what to ask.” Then COVID-19 hit, and Moira applied and was accepted for an OE boot camp, “a lifesaver, it helped me through a struggle.” She met motivated people, one “was very generous and gave me a lot of advice. I wish I could offer someone else the same. I couldn’t ask for a better experience.” Prior to boot camp, Moira had a PTC mentor whom she described as “real sunshine” at the beginning of the pandemic. “Every two weeks I looked forward to our calls. He kept me going.”

Flowers by Moira has no shop, no stock of flowers. Moira chooses the design and uses sustainable methods and an unusual business model. “You get a new arrangement every week, fresh in a vase ready to display – flowers on subscription. Sustainability is central to Moira’s operation – composting, no floral foam, no single-use plastic, only glass, ceramic and stone containers – all washed and recycled.”

“I’m honored to be part of the Buy Veteran community.” Her advice for Veterans considering following the same path, “Don’t wait, sign up [for boot camp]. It helped propel my confidence.”