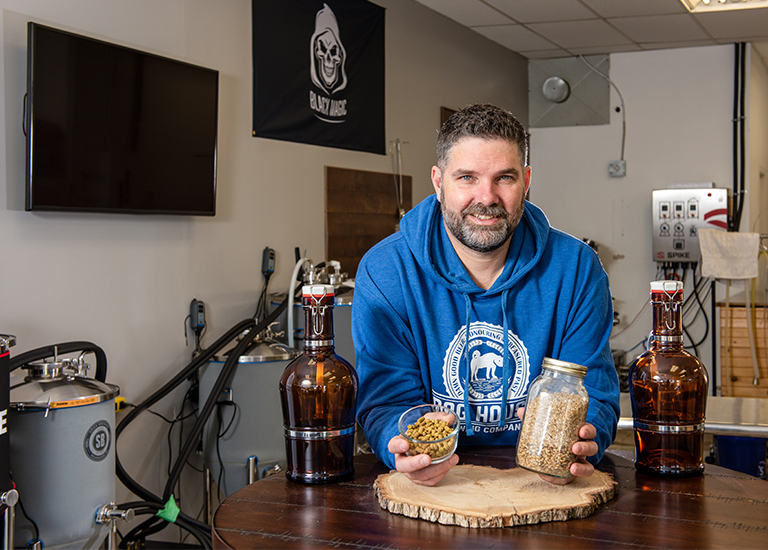 Richard McNish and Brady McNish started brewing in their basement as a hobby; now, they are the co-founders of Dog House Brewing Company. With a shared passion for fine craft beer, the father-son duo had tossed around the idea of starting a business for years with no avail. That is, until Richard’s wife, Tina Parker McNish, finally set the idea in motion with encouragement and a necessary push to “just do it or shut up.”

Richard and Brady are both serving members of the Canadian Armed Forces, so when the opportunity to participate in Prince’s Trust Canada’s Operation Entrepreneur boot camp came up, they felt one step closer to their goal of developing Dog House Brewing Company. “Brady and I did boot camp (virtually from Regina) in August,” says Richard. “The concept of boot camp is amazing and well worth every second. Their content, instructors, speakers and networking opportunities were exceptional – and they had an entire session just on sustainability, which is important to us. We migrated away from single use plastics, we have a bio-degradable can ring, and just updated our brew house to reuse water more efficiently,” explains Richard.

Richard and Brady have listed Dog House Brewing Company on the BuyVeteranCA directory. “I think it’s very valuable and relevant to be connected to that network. It will help any kind of Veteran-owned business. We have to be very careful and keep it relevant, truly tied to Veteran businesses,” says Richard.

“The Operation Entrepreneur program is outstanding. More individuals within the Veteran community should know about and utilize it. In fact, military people should know about Operation Entrepreneur long before their transition. Even if your business idea is in its infancy, it will help guide your seed of an idea and you will have a plan,” explains Richard. “It’s an awesome way to create your exit strategy from the military. One of the biggest fears for most military members when they release is not knowing what they’re going to do with themselves. Lean hard on Operation Entrepreneur, that’s what they’re there for.”

“My biggest advice to other Veterans interested in entrepreneurship - go in with a plan, do your research, estimate how busy you can be, don’t kid yourself, add 10-20 percent on that. I’m working seven days a week, literally. Understand your limitations, identify your priorities.”