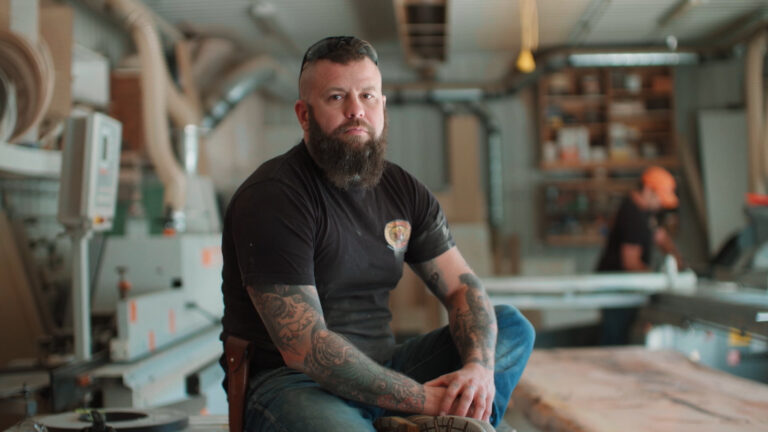 It took J.R. Smith several years after leaving the military to find his place. Now, with his own woodworking business thriving, he’s committed to helping other veterans land on their feet.

J.R. will be the first to tell you that transitioning to civilian life can be incredibly difficult.

“I signed up in 2001, and thought I was going to be in the army for life,” he said. But after 10 years in the first battalion of the Royal Canadian Regiment, J.R.’s body had had enough.

“I was still a young man. I was 33 and retired.  It was unexpected, and I didn’t know what I was going to do. I was panicked about what to do next.” He added, “There aren’t a lot of transferable skills from a combat trade.”

J.R. discovered his new passion and career path while taking a cabinet-making course. He learned quickly and started selling a few pieces. He built a business plan, started investing in tools, and Frontline Cabinetry was born. To help take his business to the next level, J.R. attended Operation Entrepreneur’s intensive week-long boot camp at Memorial University.

He said, “Operation Entrepreneur, when you go in, they have you write down five questions that you have. I could have filled that page.”

When his business started to grow and it came time to hire additional staff, J.R. knew he could offer people more than just a job. He said, “I realized I could offer a place for guys who are coming out of the military and don’t know what to do.”

“I know how hard it is, so I like to open the doors to the bases and my veteran community.”

Working for Frontline Cabinetry gives retired soldiers a focus, a chance to explore a trade, and easy access to someone who has been through the same transition.

“It’s not a formal school,” said J.R., “I show them how to do something, then watch them do it. When they’re ready, they get to work on it themselves. If anybody wants a job, there’s no experience necessary. Just show up with some drive and a willingness to learn, and I’ll teach you. And they come!”

In addition to creating beautifully crafted custom furniture, kitchens and bars, Frontline Cabinetry near Barrie, ON is employing veterans and giving them a chance to discover new careers. For your next home renovation project, contact J.R. at frontlinecabinetry.ca

Components of this article first appeared in Dockside Magazine. Thank you to Andrew Wagner-Chazalon for his permission to reprint sections of the text and interview.