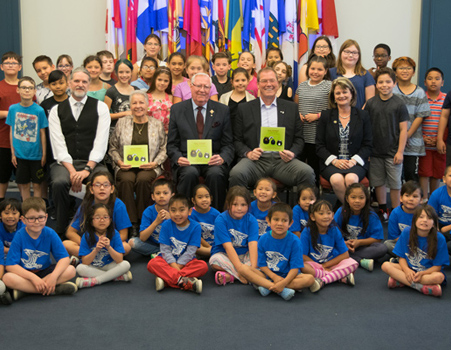 Regina—Students from two local schools started the week with a unique story time session this morning. The students listened to a recently-published Cree-language children’s book read by Lieutenant Governor of Saskatchewan, His Honour the Honourable Thomas W. Molloy, alongside Elder Betty McKenna and author Mike Parkhill. The book, A Tale of a Tail, is the latest in a series of Indigenous language children’s books and teaching tools commissioned by Prince’s Charities Canada (PCC) to support families in learning ancestral languages that are at risk of disappearing.

The project includes five different books for elementary school-age children, distributed in eight Indigenous languages: Woodland Cree, Plains Cree, Swampy Cree, Saulteaux, Dene, Nakota, Lakota, and Dakota. The books focus on important childhood development issues, and are expressed using stories and imagery culturally-specific to the students reading them. The books include the story in English, its translation to the Indigenous text, and phonetics, so they can be enjoyed for teaching and entertainment at the beginner level.

The books fill a crucial gap, as they are the only ones of their kind in most of the languages, and serve as vital links between children, families, and their cultures.

The books have been distributed through the Saskatchewan Indian Cultural Centre with the support of First Nations University of Canada. They are available in audio-video format through the Aurasma App, read by Elders and synchronized to each page-flip so children can hear how the languages sound.

“For many children, these are the only books available to them in their parents’ or grandparents’ language,” said Professor Arok Wolvengrey of First Nations University. “The books are essential literacy tools, in addition to being a way to capture our traditionally oral cultures in written and recorded form.”

This project was undertaken in partnership with SayITFirst, which wrote and illustrated the stories. The initiative was generously supported by the Government of Canada.

“Prince’s Charities Canada is honoured to be supporting Indigenous peoples in the preservation and revitalization of their languages,” said CEO Sharon Broughton. “Language-learning inspires young people and keeps those languages alive, preserving essential knowledge and practices important for all Canadians.”

This project complements PCC’s other efforts in Indigenous languages revitalization. These include the recent completion of a project which distributed Inuktitut children’s books to all kindergarten to grade three students in Nunavut, and another for children undergoing medical treatment far from home, at children’s hospitals in Manitoba.