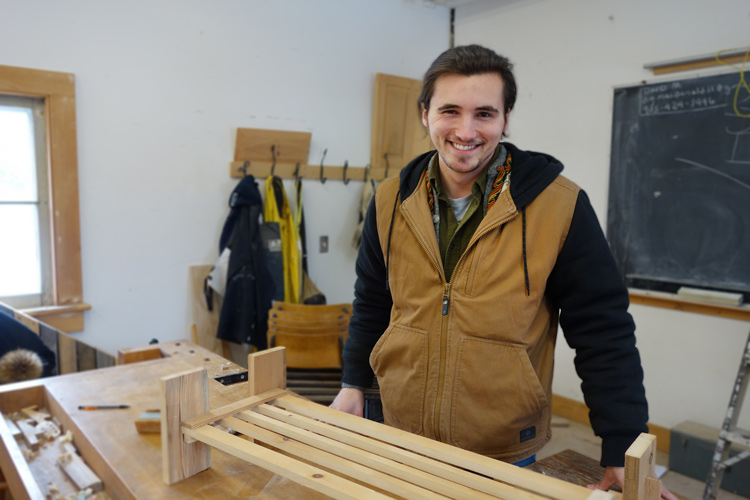 Growing up surrounded by 19th century buildings in Niagara-on-the-Lake inspired Garrett France-Wyllie’s early fascination with history, design and traditional building techniques. It is no surprise that following a college program in construction, he enrolled in a three-year diploma program in Heritage Conservation at Willowbank School.

Willowbank School of Restoration Arts is a unique institution in Queenston, Ontario pioneering an ecological approach to heritage conservation and renewal. HRH The Prince of Wales is a Patron, a natural fit with his life-long commitment to supporting the built environment and sustainable building methods.

This past summer, Garrett was selected as the 2019 Dalglish Scholar. He is the third annual recipient of the award and received a full scholarship to attend The Prince’s Foundation Summer School in the U.K..

The three-week intensive course enables students to develop their knowledge of traditional architecture, design, building and repair techniques and how these can be applied in the 21st century.

According to Garrett, “The whole experience was incredible”. The first week, he took part in drawing classes, geometry and structure exercises as well as the study of architectural development and history. In week two, at Dumfries House Estate in Scotland, he worked with classmates to learn craft and conservation skills in the fields of timber, thatching, stonemasonry, lime plastering and pargeting. The final week was a week-long design workshop where Garrett created a design proposal for a live project involving public consultations, modelling and technical drawing.

“I learned new skills and developed an interest in things I didn’t know before,” said Garrett. “I also built a new network of people doing similar work around the world”. Of particular interest to Garrett was learning about the difference between heritage conservation in the U.K. compared to in Canada.

“In the U.K. buildings are just so much older, so the approach and philosophy are different. The experience made me look at my work in Canada in a new way.”

Garrett has already been applying some of the skills he learned and putting his new knowledge to use as he expands his recently established business, France-Wyllie Restoration, specializing in wood window restoration, heritage hardware, heritage lighting and metal restoration.

In addition to covering tuition costs, materials and room-and-board, the scholarship included a travel allowance. “I was able to stay an extra two and half weeks,” said Garrett, who was visiting the U.K. for the first time. “I got to deepen my knowledge and understanding of heritage conservation, architecture and design by exploring some spectacular places like Inverness, the Outer Hebrides and St. Kilda.”

The scholarship is made possible thanks to the generosity of Peter and Camilla Dalglish, Patrons of Prince’s Trust Canada. When talking about his experience, Garrett was all smiles, “I can’t thank the Dalglishes enough. It was truly an incredible opportunity.”

In addition to supporting Garrett’s personal and professional growth, the scholarship has allowed Willowbank to improve its programming by integrating lessons learned from the experience. For example, Garrett appreciated the amount of time the school in the U.K. focused on life-drawing saying it complemented his drafting and design skills. His recommendation to increase the number of life drawing classes has been adopted by Willowbank and has been integrated into this year’s architectural graphics course.

Garrett truly embodies the values being taught at Willowbank. He is a champion for sustainability, he’s community focused and has a passion for history, restoration and reclaimed materials. He is part of a new cohort of Willowbank graduates who are changing the conversation on construction, city planning and conservation – favouring green, holistic approaches that put people and planet first.

Recipients of the scholarship are selected through a partnership between Prince’s Trust Canada and Willowbank School.