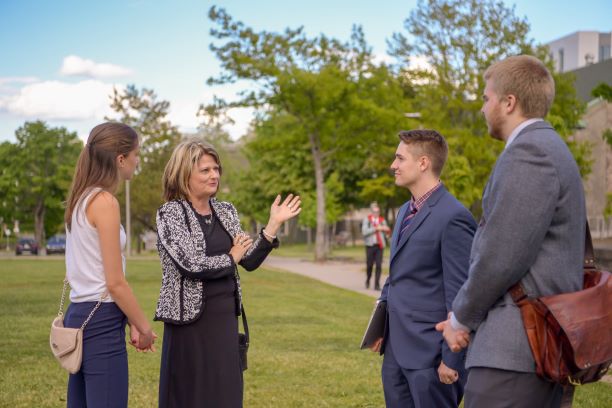 As the new CEO of Prince’s Trust Canada, June’s boot camp at Dalhousie University was the launching pad for my orientation to the Prince’s Operation Entrepreneur (POE) program.  This is where I first experienced its magic. I witnessed what happens when the resources and expertise of many are harnessed and directed towards helping soldiers, sailors, airmen and women transition from service to a new life as entrepreneurs.

Since the beginning, this program has created a remarkable and lasting impact not only for participants but for everyone involved: university partners, faculty, student volunteers, staff, corporate supporters, and the local business community.

One aspect of the program that fascinated me was the role of Enactus student volunteers. After listening to Dalhousie boot camp volunteer Reg Manzer’s speech at the graduation ceremony, I knew students were part of the special ingredient that makes POE so successful. I left Halifax needing to know more.

In September, I called Reg to talk about his experience volunteering with POE. What follows are the highlights of our conversation.  Who knows, after reading you may wish to come and see boot camp for yourself.

Reg was the president of Enactus Dalhousie from 2017 to 2018 and boot camp volunteer for both years. His reason for volunteering was deeply personal and through boot camp he gained an even greater respect for the remarkable men and women he had an opportunity to meet.

He first discovered Enactus through a classmate after returning to the Rowe School of Business at Dalhousie University, following a leave of absence to recover from a car accident. Enactus was the ideal place to expand his horizons and reconnect with peers while contributing to social enterprise and community initiatives. He loved it so much he stayed for three years.

For Reg, choosing to volunteer with POE was an easy decision.  He had served in the military for several years as a medic. During this time, he was deeply affected by the passing of a friend and comrade in the Forces. After hearing about POE’s mission to help those leaving the Forces pursue their entrepreneurial hopes and dreams, volunteering became a way to honour his friend’s memory.

The boot camp experience turned out to be more inspiring and fulfilling than he could have imagined. After the first year, he knew he would return and become more involved.  “I got far more than I gave,” he said.  I’ve come to learn that, like Reg, students who belong to Enactus are the busy, can-do, types. They juggle studies, part-time work and other commitments to be part something that has a real and relevant impact. I learned too that these students have many volunteering options, far more than was conceivable just a decade ago. Their choice to put an incredible amount of time and energy into this one program – most of which is behind the scenes - is exceptional.

The students speak of admiring the courage it takes to jump into the deep end of starting a business.  The culture shock from going from the structured military to the unstructured world of civilian entrepreneurship is a major leap. According to Reg, “to see people who have given so much to our country take on this next challenge with humility and commitment is inspiring and moving.”

Having personally overcome a serious injury, Reg described the power of witnessing people who are dealing with barriers including health and physical challenges begin to grow over the week-long program as they stretch beyond their comfort zone. “To be able to contribute, even in a small way, is a powerful feeling that needs to be experienced to be understood,” says Reg.  Seeing is believing.

There is also tremendous personal growth and learning arising from serving as a student volunteer with POE. For Reg, he says it puts all the “book learning” into practice.  From developing public speaking skills to working in concrete ways through financial analysis of business models, to validating business plans, to assessing costs and supporting marketing and communications approaches, at POE you do it all.

A key insight from our conversation is how POE offers a way for civilians to see beyond the uniform to the people themselves. Besides learning how incredibly cool their jobs were, in every conversation throughout boot camp, what surfaces are reminders of the extent to which these men and women, together with their families, had given over every part of life as we know it to Canada.

Reg would like to spread the experience of volunteering across the whole university community, enabling a wider array of faculties and disciplines to support and participate in the experience, with the potential for significant mutual benefit.

Looking ahead, while Reg may choose to build a business himself, there is no doubt he will make the world a better place.  He’s involved with Global Shapers, an initiative of the World Economic Forum, and continues to serve on several boards while working at the NS Health Authority.

Reg, you too are an inspiration – thank you for sharing yourself with POE, and for being a leadership role model for all of us.

POE weaves its way through many people’s lives, leaving lasting impact.  Each individual's story resonates in its own way, rippling throughout communities who come together to make this work possible.  Inspiration through volunteers and collaboration – we are honoured by those who walk this journey with us.