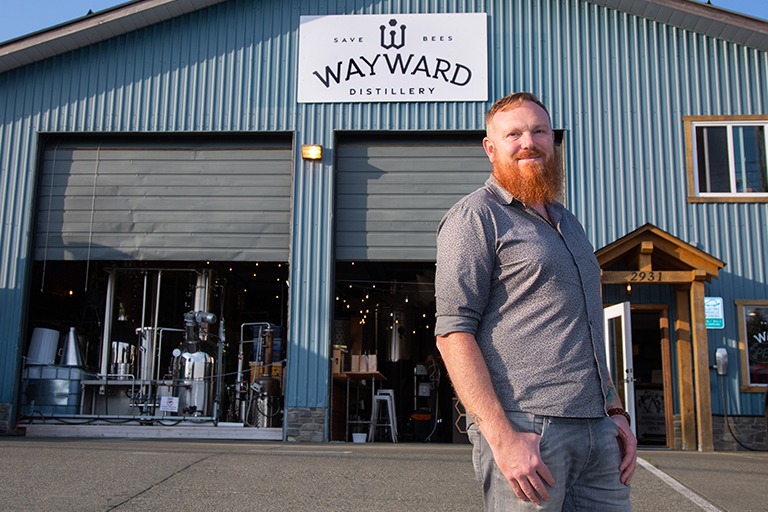 Motivated to make the world a better place, Dave Brimacome joined the Canadian Army to support peacekeeping and landmine removal initiatives. After 14 years of service – six pulling mines out of the ground in cities across the world and eight in the Air Force – Brimacome began planning for life after service. Now, Brimacome is the owner of Wayward Distillery. Launched in 2014 in British Columbia, Wayward Distillery is the first of its kind in Canada to use honey as a base for Vodka and Gin drinks, as well as its spirits.

“I always intended to open an alcohol business. I began planning for my business while I was still serving, but eventually I had to make the decision to pursue entrepreneurship full time,” explains Brimacome. “Once I put in my release, I enrolled in Prince’s Trust Canada’s Operation Entrepreneur boot camp program.”

Through the program, Brimacombe was paired with MBA instructors and PhD student volunteers for classroom learning focused on business fundamentals such as finances, marketing, business planning and more. “It was amazing. The program helped me create a business plan, focus my vision and flesh out my ideas,” says Brimacombe. “If you’re thinking about participating in Operation Entrepreneur’s boot camp, do it. The people, resources and support available to you will be immensely helpful.”

Brimacombe’s passion for community lies at the heart of Wayward. Employing military spouses and Veterans is one way Brimacombe gives back.

“Many employers are hesitant to hire military spouses because they move, but what matters to me is engaging the community and embracing those around us,” says Brimacombe.

Wayward is also the first alcohol business to have received a Living Wage Employer certification, and it is now one of 92 businesses in Canada that is Rainbow certified (queer-safe place).

Faced with having to lay off employees during the pandemic, Brimacombe pivoted to serve the community the best way he could – making and delivering hand sanitizer. “I put everything I had into,” says Brimacombe. The demand was so high he was able to hire his staff back and produce 20,000 liters a day for first responders, retail outlets across Canada, and for free to those couldn’t pay.

Now back in full force, Wayward continues to play its part in the community with a commitment to food security and pollinators. “The idea to be a honey-based distillery came from a concern for our environment,” explains Brimacome. “We’re supporting pollinator health through bee population while also preserving local agriculture,” he added.

Support your community by choosing to support Veteran-owned businesses. When you Buy Veteran, you buy local. To find a Veteran-owned business in your area, visit BuyVeteran.ca, a national directory that makes it easy to find local enterprises owned by current and former members of the Canadian Armed Forces and their families.