Veteran Turns a Beard into a Business 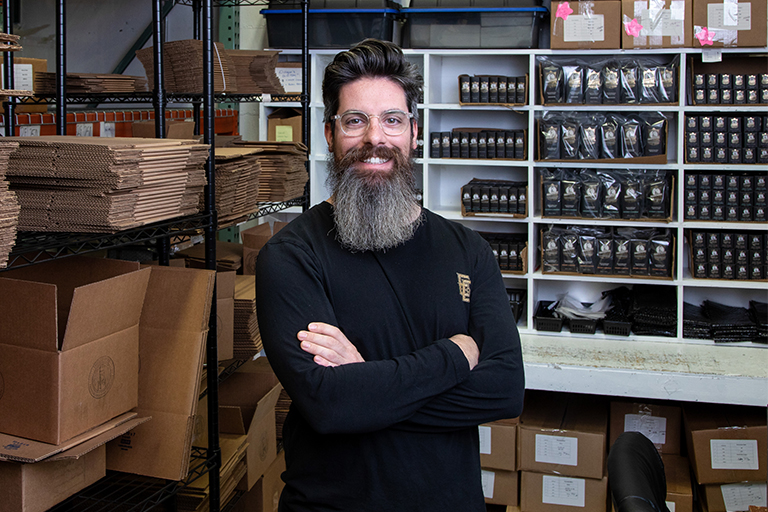 “The skills gained in the military are transferable to entrepreneurship. Both are about problem solving and acting fast on decisions,” explains Kevin Leboeuf, co-founder of Educated Beards, a Fredericton-based company that sells natural and organic premium beard-grooming products.

Leboeuf served for 12 years as a combat engineer and was part of a military team that detected and neutralized explosive devices to protect local communities. Leboeuf was medically released from the Canadian Armed Forces for post-traumatic stress disorder after his eight-month deployment to Afghanistan.

"To mark the beginning of my transition out of the military, I decided to grow a beard – something that had been strictly forbidden in the military,” explains Leboeuf.

“The only problem was that I couldn’t find quality beard grooming products without harsh chemicals or toxic ingredients,” he added. During his transition, he met his wife and co-founder of Educated Beards, Alicia Phillips, who comes from a holistic nutrition background. Combining their passion to find natural beard-care products, they embarked on a year of research and trial and error which would eventually result in the launch of Educated Beards.

“I didn’t study business,” explains Leboeuf, “so I knew I needed help growing Educated Beards. I enrolled in Operation Entrepreneur’s Mentoring program to understand business from a long-term perspective,” says Leboeuf. Now celebrating 10 years of success, the Operation Entrepreneur program offers a suite of learning and networking opportunities to move Veterans and their businesses forward, including their Mentoring program which matches entrepreneurs with mentors for business guidance.

“Having a mentor who has built businesses from scratch was key for helping me and my company mature. It’s like having a powerful cheerleader in your court with a wealth of knowledge to help broaden the vision of your business,” explains Leboeuf.

My mentor and I were able to break down every meeting into next steps – whether it was about financing, production, staff management – it was the guidance I needed,” he added.

Today, Educated Beards is 100% Certified Organic, COSMOS certified, and is exporting worldwide to Poland, South Africa, Turks and Caicos, Jamaica, the United States, and across Canada. “If you’re serious about entrepreneurship, which the military has prepared you for with skills like discipline, problem-solving and leadership, then join Prince’s Trust Canada’s Operation Entrepreneur program,” says Leboeuf. “From the resources given to you and the connections you’ll make, it’s extremely valuable for growing your business,” he added.

Behind the name of Educated Beards are values of quality and education. “We want to make top-quality products while also encouraging people to educate themselves on how to understand ingredient lists so they know what is safe to use,” explains Leboeuf.

In a few short years, LeBoeuf was nominated to represent Canada at the G20 Young Entrepreneurs Alliance and his products have been featured in GQ and Rolling Stone magazine. He is a 2022 CANIE Award finalist for Veteran Entrepreneur of the Year, presented by Prince’s Trust Canada.

Support Veterans by choosing to Buy Veteran. To find a Veteran-owned business in your area, visit Prince’s Trust Canada’s BuyVeteranCA directory. BuyVeteran.ca is Canada’s premiere online directory dedicated to promoting businesses owned by members of the military and Veteran communities.